Johnny Herbert is widely recognised as one of the greatest all-round racing drivers in the history of motorsport. Throughout his incredible career in F1, he was at the forefront of the sport, testing himself against some true greats.

"One of the most illustrious names in motor sports" 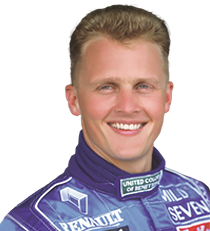 Johnny has always been involved in all types of motor racing. He enjoyed particular success at LeMans 24 Hours, winning the title in 1991 and the LeMans Series Championship in 2004. Even after his F1 career ended, Johnny has kept racing in various disciplines including karting. Having won the 1987 British Formula Three Championship, disaster struck when in the following year at the International Formula 3000 Championship race an accident resulted in Johnny badly breaking his legs. Sheer determination and bravery saw him back in a racing car at the beginning of 1989 despite the fact he could barely walk. In his decade in F1, one of his most successful results was winning the 1995 British Grand Prix.

Johnny is one of the most cheerful and bouncy characters in motorsport and is an exceedingly entertaining speaker and accomplished presenter. He regularly makes guest appearances on racing shows and speaks at corporate events, sharing his years of wisdom from inside the sport.

Johnny entertains his audiences with charming and humorous stories of his adoration of Formula 1 and motorsport.

How to book Johnny Herbert?