Chris Boardman was the equipment and technical manager to the TeamGB cyclists at the 2008 Beijing Olympic Games who achieved unparalleled success. He is the Director of Coaching, British Cycling's Olympic Programs, Head of Research and Development British Olympic Cycling Team.

A brilliant motivator and inspirational speaker 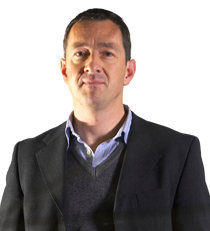 Chris accumulated innumerable national titles before bursting onto the scene in 1992 when he won gold at the Barcelona Olympics in the 4000m pursuit. This achievement turned him into a household name almost overnight. He also snatched the world record from his great rival to stamp his name firmly in the world of professional cycling. At the Atlanta Olympics, he took bronze in the Individual Time Trial event. That year he also won the prestigious Grand Prix de Nations event, became world 4000m individual pursuit champion, as well as regain the Hour Record at Manchester. In 1994, Chris took on cycling's greatest challenge - the Tour de France and took three titles at cycling's World Championships in impressive style. He is the co-founder of Boardman Bikes, the most respected and fastest growing British Bike Brand in decades.

Chris offers audience a personal insight into the drive and self motivation required to become an Olympic champion and how to achieve our goals in both our professional and private lives. He was awarded an MBE by the Queen in 1992. His media experience to date includes being a member of ITV's cycling commentary team and covering major cycling events for the BBC.

One of Britain's most successful cyclists, an experienced speaker and media personality Chris is in great demand at events throughout Europe. His relaxed and professional presentation style makes him an ideal choice for any company event.

How to book Chris Boardman MBE?