Tim Brabants MBE powered to his first ever Olympic gold medal in the final of the Men's K1 1,000m in Beijing, banishing the disappointment of Athens four years ago. This success was closely followed by claiming his second Olympic Medal from Beijing and his third in his career when he added a Bronze Medal in the K1 500m. Since winning in Beijing he has already managed to win his first triathlon at the Mens' Fitness Roughtrack event. In 2010, he won a Silver in the K-1 1000m event at the World Championships. 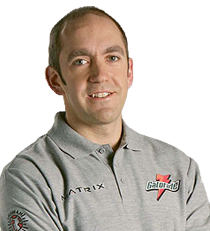 A doctor by profession, Jules Timothy "Tim" Brabants became K-1 1000m European champion at Szeged, Hungary in 2002, the first time a British paddler had won the blue riband event. Having won a European silver medal in 2004 and being the fastest qualifier for the Olympic K-1 1000m final with the world's fastest time he eventually finished fifth place in the Athens final. He returned to action in 2006, winning the gold medal in Raèice in the K1 1000m event at the European Championships and the silver medal in the same event at the World Championships in 2006. In 2007 Tim competed in the 500m K1 discipline and at the European Championships won Silver for the 1000m and Gold for the 500m. At the World Championships he won the Gold in the 1000m and Silver in the 500m.

Tim Brabants offers fascinating insights into his sporting achievements, showing how it is possible to achieve the unthinkable and how to gain psychological advantage which allowed him to fulfil his Olympic gold medal dream. Living the long build up that started a long time ago for London 2012, Tim is at ease in front of local TV, National TV and the papers. He was awarded an MBE by Queen Elizabeth II in the 2009 New Years Honours List for his services to kayaking.

Tim Brabants is able to show audiences in his inspiring presentations exactly how he was able to gain a unique place in British Sprint canoeing history and about working towards the target of 2012.