Boman Irani is an Indian film and theater actor, voice artist and photographer. He started his acting career as a theatre artist and at the age of 44 made his Bollywood debut with a role in Shah Rukh Khan starrer Josh in 2000. After appearing in some films it was his role in the 2003 super-hit film Munna Bhai M.B.B.S. that brought him into limelight. He was recognised as an actor after this film and was seen in many films since then.

"The clicks of his camera, combined with his charisma, introduced him to the world of acting" 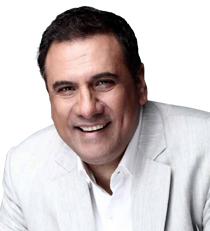 Some of his notable films include Main Hoon Na, Veer Zara in 2004 and No Entry in 2005. In 2006 he was seen in Lage Raho Munna Bhai and this role earned him Nomination at the Filmfare Awards. His role in Rajkumar Hirani's blockbuster film 3 Idiots is one of his most remembered roles and also earned him his first Filmfare Award. He is a graduate of Mithibai College in Mumbai. His love of acting was always present even during school and college. He trained under acting coach Hansraj Siddhia from 1981 to 1983 and adopted professional acting methods.

Boman is well placed to suitably rouse any event. He exudes warmth and spontaneous good humour and it's always a delight to be entertained by him. He provides a seamless connection between the stage and the audience.

A charismatic and charming speaker, Boman's speeches are always cultured, entertaining and provocative. He is a relaxed performer who is in great demand at prestigious events.

How to book Boman Irani?