Bob Peirce is a Los Angeles businessman with a long career in the British Diplomatic Service. Bob served as British Consul General in Los Angeles from 2005 until 2009, when he retired from the British Diplomatic Service after three decades of distinguished posts in China, Hong Kong, Africa, the United Kingdom, and the United States. He was Private Secretary to three British Foreign Secretaries (equivalent of the US Secretary of State): Sir Geoffrey Howe, Sir John Major and Lord Douglas Hurd. 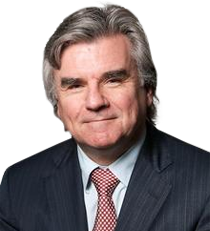 Twice a member of the Hong Kong Government (in the 1980s and again in the 1990s), from 1993 to 1997 Bob was the Secretary responsible for Hong Kong's external affairs under Governor Chris Patten. For most of the period from 1979 to 1997, he was directly involved in the negotiations with China that culminated in the handover of Hong Kong in 1997. Bob Peirce was the Chief Executive of the 1998 Independent Commission on Policing for Northern Ireland. He drafted the 1999 report, which formed the basis of policing reforms in Northern Ireland following the 1998 peace agreement. In 1999, Bob became head of Political and Public Affairs at the British Embassy in Washington, DC.

Drawing from his experience, Bob Peirce is able to offer audiences tremendous insights into the political and public affairs within Asia. He also has an immense wealth of expertise in global politics and economics.

Bob Peirce has a charming, commonsense speaking style and numerous stories from his many years in governmental and business positions give his presentations tremendous practical value.

How to book Bob Peirce?