Barry McGuigan is best known as a professional boxer. For almost 20 years, he has been commentating and writing on boxing and has become one of the leading figures of the sport. He writes a weekly column for the Daily Mirror, considered to be the top boxing column. 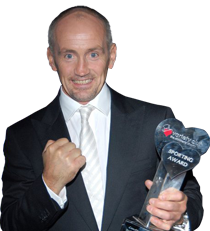 Barry McGuigan was one of the best boxers of his generation. As an amateur he won a multitude of titles, at the age of 17 he took the gold medal at the 1978 Commonwealth Games and as a Professional he won the British, European and World Titles. In 1985 he became Featherweight Champion of the World, voted 'Fight of the Year' by British Boxing Board of Control. His amazing performance later captured him another title of BBC Sports Personality of the Year. He was voted into the World Boxing Hall of Fame in 2000 and the International Boxing Hall of Fame in 2005. In 2007 Barry won the ITV show Hell's Kitchen where he discovered his culinary talents. He also recently presented a cooking show The Fabulous Food Adventure. He has commentated on boxing in the USA, Asia, Europe and in the UK for BBC, Sky, Screen Sport, etc and currently for ITV. He is also President and Founder of the Professional Boxing Association (PBA), an organisation set up to protect the interests and promote education and skills development for professional boxers.

Barry offers audiences a personal and up close look at what it takes to become a champion. He draws on the lessons he learned as a professional world class boxer and shows us how to apply these lessons in our personal and professional lives.

Engaging and intelligent, Barry's heritage and incredible career during the most difficult of circumstances make him a renowned and much sought after dinner speaker. Now an experienced media personality, Barry's presentations are filled with a mix of amusing anecdotes and inspirational ideas.

How to book Barry McGuigan?