Annabel Croft announced her arrival as the savior of British tennis when she became the youngest ever player to compete at Wimbledon aged 15. Career highlights included winning junior Wimbledon in 1984 and facing her idol Chris Evert on court one in the third round of Wimbledon. Away from tennis, Annabel carved out a successful career as a TV presenter appearing on hit entertainment shows Treasure Hunt and Interceptor. 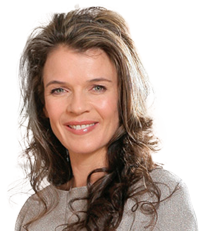 Before retiring from the international grand prix tennis circuit at the age of twenty-one, Annabel Croft had established herself as Britain's Number One Women's Player, ranked in the world's top two dozen stars. Now Annabel Croft has carved an exciting career for herself in entertainment, particularly on television.

Annabel's after-dinner speech, in which she presents a light-hearted look at her tennis and media experiences over the last 20 years, begins with growing up on the tennis circuit as one of Britain's youngest and most successful female players of the era. Her humorous tales of wide-eyed naivety will entertain, engage and amuse.

Annabel's natural style and charm lend her perfectly to gala dinner evenings and awards ceremonies, which she hosts with ease and understated glamour. Annabel adds a touch of class to any evening event and her genuine enjoyment for hosting such occasions translates fluidly from the stage.

How to book Annabel Croft?