Renowned Commentator on the Digital Revolution

Andrew Keen, Entrepreneur, Author and Broadcaster is among the world's best known contemporary analysts of digital business and culture, and commentators on the digital revolution. He is executive director of the Silicon Valley innovation salon FutureCast.

"The most famous British tech voice in the US" 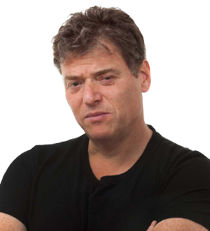 Andrew is the author of three books and his current international hit 'The Internet is Not the Answer' which The Sunday Times acclaimed as a "powerful, frightening read". He is the host of the popular Internet chat show Keen On, a Senior Fellow at CALinnovates, a columnist for CNN and a much acclaimed public speaker around the world. In 2015, he was named by GQ magazine in their list of the "100 Most Connected Men". As a pioneering Silicon Valley based Internet entrepreneur, Andrew founded Audiocafe.com and built it into a popular first generation Internet music company. He has also co-founded a number of other Silicon Valley start-up ventures including afterTV and now.tv.

Andrew is an eloquent and passionate speaker, he is sharp-witted and often extremely funny.

How to book Andrew Keen?