Professor Sen won the Nobel Prize in Economic Sciences in 1998 for his work on famine, human development theory, welfare economics, the underlying mechanisms of poverty and political liberalism. He is currently the Thomas W. Lamont University Professor and Professor of Economics and Philosophy at Harvard University.

"To fight against nuclear threats, we have to invoke rationality as well as ethics." 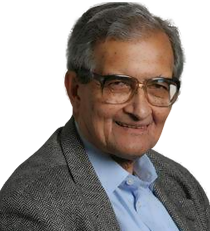 In 1996, he became the first non-American president of the American Economic Association and his reputation was no less on the other side of the Atlantic. Throughout the 1970's and most of the 1980's he was in the best faculties, including the London School of Economics and Oxford. Between 1998 and 2004 he was Master of Trinity College, Cambridge, a coveted post never before held by a non-white, or even a non-Brit. Amartya Sen's books have been translated into more than thirty languages. Professor Sen was best known for his work on the causes of famine, which led to the development of practical solutions for preventing or limiting the effects of real or perceived shortages of food. Time magazine listed him under "60 years of Asian Heroes" and in 2010 included him in their "100 most influential persons in the world".

Professor Amartya Sen provides audiences insights into the debate over globalization He also discusses the deception of using cultural differences between countries as an explanation of economic and political differences.

A highly confident and passionate speaker Professor Amartya Sen is in great demand from audiences keen to benefit from his invaluable insights.

How to book Prof. Amartya Sen?