Gareth Southgate was appointed as England manager in November 2016, following a successful spell as interim boss. He took on and oversaw the Three Lions' World Cup qualification campaign, leading England to Russia 2018 and through to the semi-finals.

"All of us are ambassadors for England. But we have all been fans as well, rushing home from work or school to watch our games." 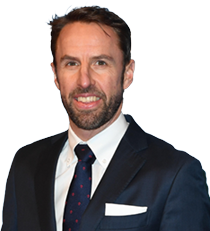 Initially a midfielder after coming through the ranks at Crystal Palace and captaining the Eagles to the old First Division title in 1994, it was following a move to Aston Villa a year later that Southgate first earned international recognition. He made his Three Lions debut in 1995 against Portugal, and quickly became a key player in the squad as a central defender as England went on to reach the semi-final of Euro 96 on home soil. After six years and almost 200 appearances for Villa, Gareth joined Middlesborough in 2001 where, as captain, he led the side to their first major trophy with the League Cup in 2004. He has also worked with young players in England's development teams and also helped oversee changes in grassroots football with the aim of helping young players improve their technical skills.

Gareth draws on the lessons learned on the pitch to show audiences the importance of teamwork in business and how to achieve our own personal goals. His success at the 2018 World Cup has bought Gareth significant admiration from England fans - he was lauded for personal qualities shown in the World Cup.

An experienced speaker and media personality, Gareth's presentations are highly entertaining and inspirational.

How to book Gareth Southgate?