Allan Lamb's impressive international cricketing career, spanning the decade 1982-92, included 79 test matches for England and 128 One Day Internationals. He captained England three times against the West Indies and Australia and captained Northampton CC from 1989 to 1994. Allan scored 4654 test runs with 14 centuries and 33502 first class runs, scoring 89 first class hundreds. Allan retired from cricket in 1995 and has set up his own company Allan Lamb Associates, a corporate hospitality, sports marketing and travel company. 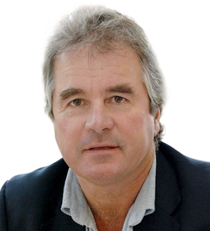 Born in South Africa, Alan began his cricketing career playing for his country's Western Province team. In 1978, he moved to England and signed to Northamptonshire. Since retiring from cricket, Allan has published his autobiography called 'Silence of the Lamb' which was released in 1996. He has also done television work including working on Sky Sports and Channel 5 as an analyst. In 1980 he was awarded Cricketer of the Year.

Allan is a very amusing speaker and his presentations are filled with a plethora of hilarious anecdotes from his impressive career as an international cricketer.

How to book Allan Lamb?