Kitty Brucknell appeared on the first show of X Factor series 8 in front of the new panel of judges. Kitty proved herself to The X Factor judges when she literally lit up the stage at boot camp, with an amazing rendition of Feeling Good by Nina Simone. A dramatic rendition of Who Wants To Live Forever stunned the public on the first live show.

"Kitty certainly knows how to put on a show" 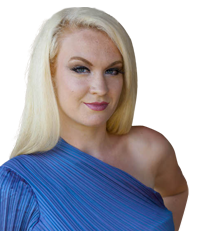 Kitty says that she was born to be famous and makes it her aim to be bigger than Britney spears - and she has so far appeared on 33 TV shows as part of her aim for fame. It has been revealed that Kitty also performs under the name of Kimberley Dayle as a tribute artist to both Lady Gaga and Britney spears. Kimberley has been featured in many magazines and newspapers along with numerous TV and radio appearances with her Britney Spears tribute act and show. She has also toured the world and gained international acclaim for her Lady Gaga tribute shows.

Kitty is a relaxed performer who is in great demand as an entertainer at events all over the country.

Kitty's entertaining, high-energy and power-packed shows have built her reputation as an entertainer who really delivers.

How to book Kitty Brucknell?