Alan Shearer OBE, is lead analyst on the BBC's flagship football programme Match of the Day and a weekly football columnist in the Sun newspaper. His Foundation - the Alan Shearer Foundation which launched on 31 May 2012, funds the Alan Shearer Disability Centre in Newcastle. One of England's greatest ever strikers, he is still the Premier League and Newcastle United's record goal scorer. 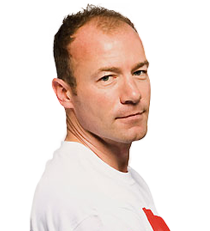 His career started at Southampton where he scored a hat-trick on his debut. He moved to Blackburn Rovers where his goals helped them to win the Premier League title in the 1994-95 season. A world record £15m transfer fee saw him return to the north-east and Newcastle United where he stayed until he retired in 2006. Alan was capped 63 times for England and scored 30 goals. He was named PFA Player of the year twice. He now has a highly successful media career working for the BBC, Five Live and Be In Sport covering the Champions League and England matches. He is an ambassador for Speedflex, a high intensity cardio and resistance training concept and alongside his work for his own Foundation he supports the Sir Bobby Robson Foundation, CHUF and the NSPCC. Alan is an accomplished 6 handicap golfer and Callaway ambassador and founder member at Close House Golf Club in Newcastle.

Alan Shearer has been described as one of the greatest footballers of all time and having fulfilled his childhood dream to play for his local side of Newcastle United and captained the England team, he is now in great demand for inspirational talks about his time in the game, as well as being a top BBC TV pundit for their flagship, Match of the Day. He is available for meet and greet personal appearances, live presenting and question & answer sessions.

One of the most famous Geordie's, Alan Shearer is a respected speaker on all aspects of the modern footballing era and enjoys popularity with a wide ranging audience.