Tom Daley is best known as an Olympic diver, specialising in the 10-metre platform event. Tom has enjoyed a successful career also winning competitions such as the FINA World Championships and British Championships.

"One of the UK's most successful and best loved athletes" 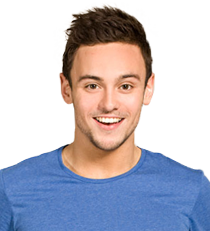 When Tom is on the diving board, his form and bold confidence is palpable. His continued hard work paid off in the years following, as he won two gold medals at the Commonwealth Games in 2010, and in 2012 earned his first Olympic medal, in the 10-metre Individual Platform diving competition. Tom later added to his 2012 bronze medal with another bronze in the 2016 Rio Olympic Games. Tom's biggest achievement to date, came in 2021. He won his first Olympic gold medal at the Tokyo 2020 Olympics. He has been awarded the BBC Young Sports Personality of the Year award and The Herald Award for Sports Personality of the Year three times. He was also featured in Time magazine's special Olympic Games edition, as one of the top 100 Olympic Athletes to Watch.

Tom has achieved great success at senior level at an early age, which has also brought vast media experience both in the UK and abroad. As a speaker, Tom discusses the issues surrounding diversity and inclusion, he raises awareness of LGBT+ issues, and the importance of acceptance and understanding in the workplace.

Tom´s infectious character and likeable presence adds prestige and popularity to any event worldwide as the youngest ever British World Champion in any sport.

How to book Tom Daley?