Isabel Aguilera is one of the top executives in Europe according to the Financial Times and Fortune Magazine and a renowned specialist in success strategies for developing competitive leadership. She is the former CEO of Google Iberia and of General Electric Spain and Portugal.

"An Expert in Change Management & Leadership" 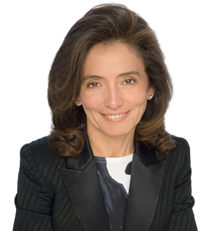 Isabel was responsible for establishing Google Iberia in Spain and Portugal (2006-2008) and later served as the CEO of General Electric in Spain and Portugal (2008-2009). Prior to this, she was responsible for creating NH Hotel Group's international business model after it purchased hotel chains in Mexico, Germany and Holland. Developing her activity as a global COO, Isabel led the integration of all the operational models in record time and achieved savings of 38 million Euros as a result. In 2009 Isabel founded her own Consultancy called IMAN. She is an Associate Professor at ESADE and Deusto Business School, and participates in a number of entrepreneurial projects, such as IMAN Business Coaching, a leading Human Resources company.

Isabel shows audiences how it is possible to build strong relationships between the business sector and the Internet community. She also explains in great depth the great opportunities the internet has to offer existing and new businesses alike.

In her fact filled presentations Isabel shows audiences how she has become a business force to be reckoned with.

She presents in English, Italian, Portuguese or Spanish.

How to book Isabel Aguilera?