Four times Formula One World Champion, Alain Prost is without doubt one of the most successful Grand Prix drivers of the modern era. Until Michael Schumacher re-wrote the history books in 2001, Alain held the record for most Grand Prix victories, with 51, he also claimed 42 fastest laps, 106 podiums and 798.5 points during his illustrious time in Formula One. 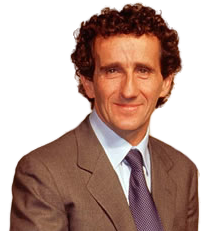 Born in France in 1955, Alain Prost began competitive car racing in 1976 competing in Formula Renault. He quickly ascended through the ranks and made his Formula One debut in 1980 with McLaren. A move to the Renault team the following year would see Alain grace the top step of the podium for the first time at his home Grand Prix in Dijon. After his move to Ferrari, Alain claimed Ferrari's 100th Grand Prix victory in France in 1990 and went on to score 5 victories for the famous Italian marque and end the season as runner-up behind Senna. After a frustrating year in 1991 and a sabbatical season in 1992, Alain made a welcome return to Formula One in 1993 partnering Damon Hill in the Williams F1 team.

Drawing from his experiences as a Formula One driver and successful businessman, Alain entertains audiences with presentations in which he demonstrates the importance of motivation and team collaboration which results in success.

Alain is a fascinating personality with a truly inspiring motor racing career behind him; his continuing success and drive make him an enthralling and highly sought-after speaker around the world.

How to book Alain Prost OBE?