Often named the funniest man alive, John Cleese is both a versatile comedic actor and a leading business motivator. He went from being "the tall one" on Monty Python's Flying Circus to being a ubiquitous presence in films, television and advertising. 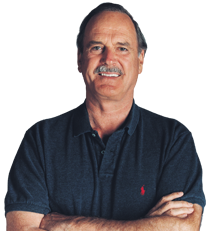 John started out in the 1960s as a member of Cambridge's comedy troupe The Footlight Society. He wrote for television and magazines, and in the late '60s co-founded the Monty Python comedy group. He was especially good at portraying prim, rigid characters who seemed about to explode into insanity at any moment, a trait he exploited as Basil Fawlty, the main character of the BBC comedy series Fawlty Towers. He has always been involved as an actor and writer in the Monty Python film projects. His biggest success came with the movie A Fish Called Wanda, which he also co-wrote and co-produced. He also played Headless Nick in Harry Potter and the Sorcerer's Stone and Harry Potter and the Chamber of Secrets, and took the role of "R" in the James Bond film The World is Not Enough and the role of "Q" in Die Another Day.

John helps businesses understand the importance of creativity and its direct relationship to all aspects of the corporate spectrum. He shares with audiences his comprehensive and specific messages on how to create the conditions in which one's creativity can best flourish.

As a speaker John is unrivalled with his exceptional use of humour leaving audiences with a highly memorable and rewarding performance.

How to book John Cleese?