Fascinating Aida, Britain's top female comedy singing trio, was officially born in 1983 when they were offered a chance to write a couple of songs for Stop the Week programme on BBC Radio 4. After that, work came thick and fast and what had been a pleasant diversion soon became a full time occupation. The group have written songs for radio and television programmes such as Stop the Week, After Hours, People Like Us and TV-am. The group were the subject of several BBC documentaries. All the current members are also established actresses, mainly in musical theatre.

"See them before you die otherwise your life will have been meaningless" Daily Mail. 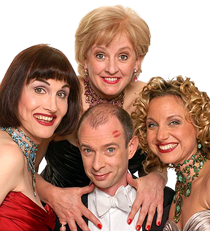 Over the years, they gained a growing fan base and national popularity, earning three Laurence Olivier Awards nominations for Best Entertainment in 1995 and 2000. They were voted Most Popular Act 1985 by City Limits magazine and also earned a Perrier Comedy Award nomination. The trio started performing in a West End wine bar, but they soon caught the media attention, and performed on television for the first time in July 1983.

Nothing is sacred as Fascinating Aida disclose their incisive wisdom of a whole new world of satirical targets. Prepare for an evening of elegant and excessive entertainment.

How to book Fascinating Aida?