Tim Lovejoy is a renowned television presenter and host. From 2006 to 2012 Tim co-presented the incredibly popular TV show Something for the Weekend on BBC2. Also in 2011, Tim launched allplay - a national campaign to help more people play tennis and promote the sport. In 2012, Tim signed up for a huge bike ride for Right to Play from the start of the Tour de France to the 2012 Olympic stadium in London - 300 miles over 3 days. 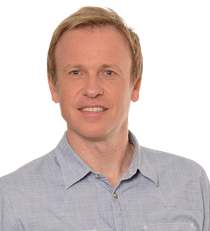 Tim moved into television as a covering VJ for MTV. He then joined Planet 24 where he worked as a researcher for The Big Breakfast and progressed to produce the show. Tim, who joined Sky Sports at the beginning of the 1996-97 season, spent many years combining his busy television schedule with presenting a music show on London's XFM radio along with a brief stint on Virgin radio. He is also known as the former presenter on the award winning Saturday morning show Soccer AM on Sky Sports. In 2009 he appeared on Britain's Got More Talent and BBC One's This Week and co-presented Sport Express on Radio 5 Live. In 2010 he was successfully chosen to join the Blue Peter team as a guest presenter.

His typical humour has made him a popular face in UK programming and in general with the British public. He draws audiences into the spirit of the event, holding their attention and making them laugh hysterically.

Charismatic, ultra cool and quick witted, Tim adds immense appeal to any event whether presenting, hosting or handing out awards.

How to book Tim Lovejoy?