Lawrie McMenemy rocketed to footballing fame when he turned one of the provincial clubs into a force to be reckoned with. In 1973 he became assistant manager at Southampton and was promoted to manager in December. In 1977-78, the Saints won promotion to the First Division and a year later reached the League Cup Final. Probably his biggest achievement was when he took second division Southampton to the FA Cup Final in 1976, beating Manchester United 1-0. 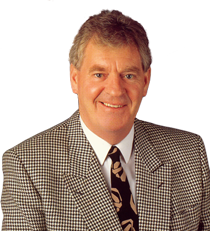 Lawrie is heavily involved in charity work, he is a Patron of the Alzheimer's Disease Association and works with Scope, St Dismus Society, N.S.P.C.C, Autistic's Society as well as the Romsey Hospital Appeal and Rose Road Children's Appeal. He is also on the committee of Outward Bound. He also coached a squad selected from the eight-nation Afghan peacekeeping force (ISAF) for Afghanistan's first international sporting event for five years in 2002.

Lawrie offers audiences the benefit of his considerable expertise as a winning football coach. His strong personality and ability to communicate with players and fans has led him to be admired by many. Appearing regularly on television, radio and in print he is highly respected and revered as a top football pundit and commentator.

Lawrie's invigorating and entertaining presentations focus on management motivation. A theme he has addressed at numerous conferences for corporate clients which include Reuters, Hewlett Packard, Sema Group, Lloyds Bank, IBM and The Royal Mail amongst others.

How to book Lawrie McMenemy MBE?