Tiff Needell is a British racing driver and television presenter. He is best known as a former co-presenter of Top Gear and a member of the Fifth Gear programme for Five. He presents a new series, Tiff Needell's Ad Brakes, for the Men and Motors channel. He has presented for Sky Sports American NASCAR and Indycar series.

"A Popular Host and Presenter" 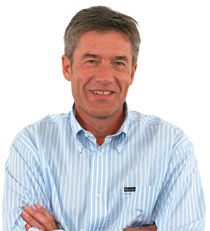 Tiff attended City University, London where he achieved an Honours Degree in Civil Engineering. Hired by George Wimpey & Co, his day job was as a Structural Design Engineer. He first raced at a driving school at Brands Hatch in 1970 and progressed to Formula Ford, his progress assisted by the use of a Lotus 69 FF he won in an Autosport magazine competition. He was refused a super license by the sport's governing body FISA in 1979 when he was offered a drive in the Formula 1 Ensign, however he drove for the team in the 1980 Belgian Grand Prix. After that Needell went into sports car racing, driving various Group C cars including the Nimrod-Aston Martin, Dome and TOM'S Toyota. He finished third at Le Mans in 1990 with the Alpha Porsche 962. There followed a period in touring cars with Vauxhall and Nissan in the BTCC. This was followed by a drive with Lister sports cars.

Best known in the UK as a television presenter and motoring journalist, in particular in association with the BBC TV series Top Gear, he is one of several people suspected of portraying the elusive masked racing driver The Stig. A regular face on advertising campaigns, voice of many video games and narrator of several Discovery Channel documentaries, Tiff is in great demand on the corporate circuit, where his skills as a host and hilarious speaker are highly valued.

Thought-provoking and highly entertaining, Tiff's tailored presentations are filled with anecdotes from his career.

How to book Tiff Needell?