Sven Goran Eriksson is a Swedish football manager and former player with a reputation as one of the most progressive and most famous football coaches in the world. He is perhaps best known for his time as the manager of England, but he has also been the national coach for Mexico and Côte d'Ivoire, as well as, two clubs in England. He is currently the manager of Chinese Super League club Guangzhou R&F. 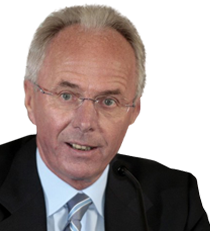 Sven made history in January 2001 when he became the first foreign coach of England; he was recruited by the FA from Lazio in February 2001 on a five-year contract. He improved England's FIFA World Ranking from 17th place in January 2001 to 5th place in July 2006, reaching 4th during the 2006 World Cup, and was rated by the FA as England's second most successful manager. He is the only England manager who has never failed to guide England to the last eight in a major tournament.

Sven is a very accomplished speaker on topics such as man management, motivation and the philosophy of confidence and winning. He shares with audiences around the world the minds of footballers and looks at how to nurture them to condition them for sporting success.

Sven's considerable sporting and managerial experience, combined with his pleasing manner, informed approach and articulate delivery, make him a natural choice for personal appearances, motivational and after dinner speaking.

How to book Sven Goran Eriksson?