Sue Barker OBE is a Grand Slam winning former tennis champion and sports broadcaster. She is the longest-standing host of the BBC's "A Question of Sport" which she began presenting in 1997, stepping down from her presenting duties in early 2021. 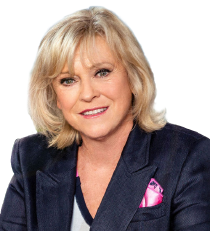 Sue won eleven WTA Tour singles titles and twelve doubles titles during her tennis career, ranking World No.3 in 1977 following her French Open victory in 1976. Upon retiring from tennis, she became a commentator and sports reporter for Australia's channel 7, before going on to anchor tennis coverage for British Sky Broadcasting. She then joined the BBC team to present their Wimbledon coverage and has anchored the two-week long broadcast ever since. In 2012, Sue provided live coverage of the London 2012 Olympic Games as the BBC's anchor in the prime-time early evening slot. Sue was awarded an OBE in 2016 for services to Broadcasting and Charity.

Away from television, Sue has created another career as a dynamic host for corporate events. This can range from scripted award ceremonies to facilitating conferences. Having gained a wealth of experience presenting world-class competitions, Sue also works with a select group of blue chip companies helping their promotional / marketing activities.

Sue's bubbly, charismatic personality, easy manner and professionalism make her an ideal choice as an event host and she is always well received.

How to book Sue Barker OBE?