Alexander Likhotal teaches at the Geneva School of Diplomacy and International Relations and Geneva Business School. In addition to an academic career he served as a European Security analyst for the Soviet Union leadership and was Deputy Spokesman and Advisor to the President of the USSR, Mikhail Gorbachev (1989 -1991).

"The multi-faceted crisis that has hit the world shows with a renewed sense of urgency how tightly the key challenges of environment, development and security are intertwined." 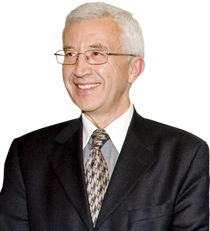 From 1996 to 2016 he worked for the Geneva based Green Cross International - international environmental NGO - first in the capacity of Vice-President and later President of the organisation contributing to its development until his retirement in 2016. He was a visiting professor at the Northeastern University, Boston, USA (1996-1998), Chubu University, Kasugai, and Temple University, Tokyo, Japan (2017), Research Associate at the institute of European Studies of the Russian Academy of Sciences in Moscow (1992 - 1997) and Associate Editor of Security Dialogue Journal, Oslo, Norway (1994-2000). He is the author of several books and numerous articles.

As an insider of the process that brought the cold war to its end and as an influential environmental leader on the world stage, Professor Likhotal is ideally positioned to advise organisations around the world on how to lead the change in today's crisis ridden world. The biggest challenge in the next 10 years will be our ability to offset our systemic crisis with comprehensive solutions based on scientific knowledge, focusing on the problem itself and not on usual political agendas.

Tailoring his engaging presentations to focus on individual clients' objectives Prof. Likhotal uses numerous examples of strong leadership and effective decision making to inspire and challenge audiences the world over.

He presents in Russian and English.

How to book Prof. Alexander Likhotal?