Anupam Kher is an Indian actor who is considered one of the greatest actors of contemporary cinema. He has appeared in nearly 470 films and 100 plays. Though mainly appearing in Bollywood (Hindi) films, he has had roles in some films from other nations as well most notably the 2013 Oscar nominated Silver Linings Playbook. He has extended his genius into production of such national and international award winning films such as Bariwali and Maine Gandhi Ko Nahin Maara.

"Nothing is all wrong. Even a clock that has stopped running is correct twice a day" 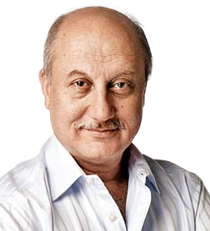 Kher has held the post of Chairman of the Censor Board and the National School of Drama. He has been awarded the Dalai Lama Award for his work with underprivileged children. In 2008, he established The Anupam Kher Foundation to spread education among less privileged children and to provide palliative care to people with life-limiting. In 2005, he established his dream project Actor Prepares a premier acting school in the heart of Mumbai. In 2004, he was honoured with the Padma Shri by the Government of India for his contribution to Indian cinema. He is also widely regarded as an intellectual talk show participant.

After being much sought after as a motivational speaker in India, Anupam Kher has been increasingly sought out by business schools and corporates to lecture about the lessons that can be imbibed from acting in coping with the pressures of life and living.

With the histrionics of an acting guru, the genius of a thespian, the combination of the flair of a producer and director, and the humanitarian aspect of a Dalai Lama award-winner for his contribution to cinema and social work, Anupam Kher never fails to leave anyone inspired.

How to book Anupam Kher?