Scott Ian is the co-founder and rhythm guitar player of Anthrax. Scott, with Anthrax helped create thrash metal in the early 80's. He and Anthrax have sold over ten million records worldwide, have multiple Gold and Platinum record awards, have been nominated for a Grammy six times, and have toured the world since 1984 on over one hundred something tours. They just released their eleventh studio album For All Kings to critical acclaim and commercial success. The album entered the Billboard Top 200 chart at number 9 and the worldwide charts at number 8. In 2016 they tour with Iron Maiden playing stadiums in South America and plan to tour in support of For All Kings for the next two years. 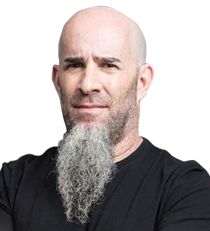 Scott has been doing solo "Speaking Words" tours in the U.S., Canada, the UK, Ireland, Australia, Scandinavia and Germany. The DVD he filmed in Glasgow, Swearing Words In Glasgow was released in November of 2014. He hosts the horror FX show Bloodworks for the Nerdist Channel. For an episode last season he played a walker on one episode of The Walking Dead. For the new season of Bloodworks Scott recently filmed an episode from the set of Game of Thrones.

Scott Ian shares with audience's worldwide wildly entertaining stories about the people he has met, the experiences he has had and the mischief he and his peers have gotten into over the past 30-plus years of being in a band, putting out records and touring around the world and back.

Scott has approached life and music with a smile, viewing the band with deadly seriousness. Self-confident swagger, mixed in with a healthy dose of devil-may-care attitude, Scott's energy reveals his passion for his craft, and he has never let the gravity of being a rock star go to his shaven, goateed head.

How to book Scott Ian?