Ray Stubbs has carved a successful career in sports broadcasting after playing professional football with Tranmere Rovers FC. Currently he is chief football reporter for BT Sport having previously worked for the BBC and ESPN. He presented ESPN's live coverage of the 2011, 2012 and 2013 FA Cup. Ray covered the last two World Cups for BBC Sport as well as the European Championships in 1996 and 2000. 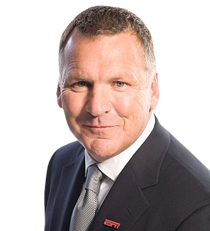 He joined Tranmere from school and was on the club's books for five years before switching to an administrative role with the club. He then spent three years with BBC Radio Merseyside as a reporter and presenter. In 1986, Ray moved to BBC Manchester as an assistant producer, working on a number of sports including snooker, darts and bowls, as well as A Question of Sport. At the start of the 1998-99 season he hosted Match of the Day Extra. He also co-hosted coverage of the 1998 Winter Olympics, co-presented coverage of the 1998 Commonwealth Games and has reported for BBC One's On Side.

With a wealth of experience commentating on a wealth of diverse and different sports, Ray is an ideal choice both a host and a thoroughly entertaining after dinner speaker.

A relaxed and confident presenter, Ray is well used to the pressures of live television and is an excellent host.

How to book Ray Stubbs?