Oliviero Toscani work is internationally recognised and includes corporate images, often highly controversial, and advertising campaigns. He is the creative force behind some of the most successful brands including Benetton, Esprit, Valentino, Chanel and Fiorucci. Currently Oliviero runs a research facility for modern communication called 'La Sterpaia'. 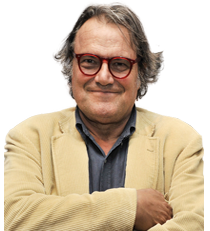 As a photographer Oliviero has worked for international magazines such as Elle, Vogue, GQ, Harper's, Esquire, Stern. Perhaps best-known for designing controversial advertising campaigns for Italian brand Benetton from 1982 to 2000 which included a photo of a man dying of AIDS, lying in a hospital bed surrounded by his grieving relatives. In 2005, five years after his resignation from Benetton, he sparked controversy again with his photographs for an advertising campaign for the men's clothing brand 'Ra-Re'. His work has been exhibited all over the world and he has won numerous awards.

No stranger to controversy Oliviero Toscani has gained a reputation as a unique, masterful and highly creative individual. Being able to communicate in ways unthinkable to a traditional multinational corporation his presentations provide fascinating insights into the mindset of a true pioneer. Toscani's work may be a form of cynicism, or it may be a vehicle for stirring up debate around social issues. Or it may be both.

Oliviero Toscani is a frank and passionate speaker and a truly colourful character, very comfortable with the seeming contradictions in his nature.

He presents in Italian, English, French and Spanish.

How to book Oliviero Toscani?