Nigel Kennedy is a multi-award winning and world-wide renowned skilful violinist. For over twenty-five years, he has been acknowledged as one of the world's leading violin virtuosos and is, without doubt, one of the most important violinists Britain has ever produced. He made his reputation with Vivaldi's Four Seasons. More recently he has concentrated on composing and more pop influenced work.

"He is the best selling classical violinist of all time" 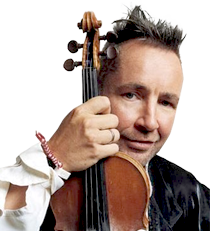 During his career Nigel Kennedy has undertaken countless international tours, performing with the world's major orchestras and conductors, from Europe to the United States to Australia. Major debuts have included London's Royal Festival Hall, the Berlin Philharmonic, his New York orchestral debut in 1987 and his 2004 French debut. His passion is jazz. He has a jazz quintet in Krakow, Poland, where he lives for part of the year. He has attracted an enormous amount of worldwide media attention throughout his extraordinary career. His television appearances have been wide and varied and he has given numerous public and private performances for members of the British royal family.

Nigel's virtuoso technique, unique talent and mass appeal have brought fresh perspectives to both the classical and contemporary repertoire. His strength is his remarkable sensitivity in caressing a melody to life.

Nigel is almost as well known for shunning classical-music traditions, his expletive-strewn "mockney" language and his shambolic attire, as he is for his fabulous, if sometimes controversial, interpretations of classical music.

How to book Nigel Kennedy?