Munir Akram is the former Ambassador and Permanent Representative of Pakistan to the UN in New York and Geneva. During his tenure he actively promoted and protected Pakistan's vital national interests in peace and security, development and trade as well as human rights. He was the most senior diplomat in the Ministry of Foreign Affairs Pakistan specialising in multilateral diplomacy and exploring business opportunities in the Middle East and China. 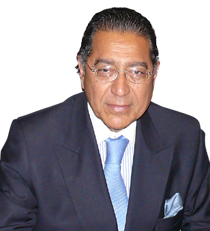 Munir Akram holds a degree in Political Science and Law. In his distinguished diplomatic career spanning over 38 years, he has held a number of important positions including Ambassador & Permanent Representative of Pakistan to the United Nations in Geneva (1995-2002); Additional Foreign Secretary at the Ministry of Foreign Affairs (1992-1995); Ambassador of Pakistan to the European Community, Belgium and Luxembourg (1988-1992); Director-General for United Nations, Economic Cooperation and Policy Planning at the Ministry of Foreign Affairs (1985-1988) and Minister in Pakistan's Embassy to Japan (1982-1985). In recognition of outstanding contribution, selfless service and diplomacy he received the Hilal-i-Quaid-i-Azam award by the President of Pakistan.

With his vast experience in diplomatic talks and negotiations on economic and environmental issues, Munir Akram explains the impact climate change has on developing nations. He also shares his invaluable insights and perspectives on the economic landscape and the complex issues of trans-global business whilst providing useful strategies to stimulate growth.

Well versed in the art of diplomacy, Munir Akram presentations are enlightening and invaluable to decision makers from all fields making him highly sought-after at prestigious conferences the world over.

How to book Ambassador Munir Akram?