Dr. Michio Kaku is one of the most widely recognised scientists in the world today. A theoretical physicist, futurist and Professor of theoretical physics, Michio is the co-founder of string field theory and continues Einstein's search for a "Theory of Everything".

"You have to realise that most of science is not done by direct experiment at all." Michio Kaku 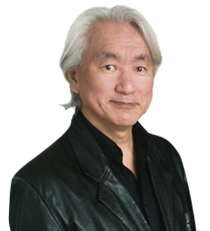 He holds the Henry Semat Chair and Professorship in theoretical physics at the City College of New York, where he has taught for over 25 years. He has also been a visiting professor at the Institute for Advanced Study at Princeton, as well as New York University (NYU). He is the author of several scholarly, Ph.D. level textbooks and has had more than 70 articles published in physics journals, covering topics such as superstring theory, supergravity, supersymmetry, and hadronic physics, seeking to unify the four fundamental forces of the universe - the strong force, the weak force, gravity and electromagnetism. He has hosted several major TV specials, such as Sci Fi Science, Time and Visions of the Future and 2057 and has written for popular science publications.

Using the cutting edge research of today's foremost scientists, Michio explores the science of tomorrow: computers, artificial intelligence, reshaping our genetic inheritance. He explains how science is opening entirely new avenues for society and organisations at large and provides valuable advice on how to prepare for change. Michio's research directly impacts on the world of business, finance, and the economy.

A mesmerising and humorous speaker, he conveys a contagious sense of the wonders of science at the most prestigious conferences world-wide. Fantastic visuals captivate audiences.

How to book Dr. Michio Kaku?