Michael Gross, The German Albatross, is perhaps the finest European swimmer ever. He held four world records in four different events at the same time. Michael now advises corporations on different aspects of marketing and product positioning and is highly sought-after by decision makers from all fields, eager to benefit from the former Olympic champion's innovative and motivational ideas. He is featured in Bud Greenspan's 16 Days of Glory, the documentary film of the 1984 Summer Olympics. 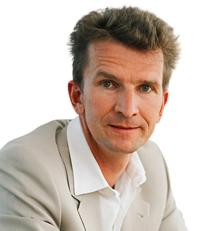 At 19, Michael Gross set his first world record in swimming at the German nationals in 1983. In the following three years, Michael broke his own record in the 200meter freestyle four times and set world marks in the 200m butterfly (four times) and 100m butterfly and 100m freestyle. During his swimming career, he won a total of thirteen medals at the World Championships (including five golds), fifteen gold medals at the European Championships. He was named Male World Swimmer of the Year in 1985 by Swimming World magazine and admitted to the International Swimming Hall of Fame in 1995.

Nicknamed the "Albatross" for his massive wing span, Michael Gross dominated the surface of the water for a decade as one of the greatest swimmers in history. He helps companies develop a performance culture that designed to overcome the ever-changing challenges towards success for the future. Michael has vast experience in communications and marketing, particularly in the fields of change management, promotion and sponsorship. In addition, he is in demand as a facilitator of seminars and conferences.

This 6ft. 7in. world record breaker, Michael Gross is a commanding presence and excellent communicator at a wide range of corporate events. All his invaluable speeches are designed for any subsequent question and answer session.

How to book Dr. Michael Gross?