Jock Clear is an English Senior Performance Engineer working for Scuderia Ferrari where he is currently the Driver Coach for Charles Leclerc. Before moving to Ferrari, he worked at Mercedes, where he was the race engineer for Lewis Hamilton and Michael Schumacher.

"One of the most respected names on the F1 circuit" 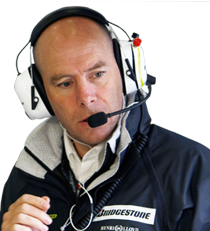 Jock's career in motorsport began at Lola Cars, where he worked as a design engineer before moving to the position of head of composite design at Benetton Formula in 1989. In 1992 he worked as senior designer at Leyton House Racing, then joined Team Lotus where he became Johnny Herbert's race engineer in 1994. Then, he transferred to Williams F1 and engineered David Coulthard. Jacques Villeneuve joined Williams in 1996 and Jock was his race engineer; the Canadian won the world championship the following year under Clear's guidance. Jock worked with Sato in 2004 - 2005 and then with Rubens Barrichello from 2006 - 2009. After the team became Brawn GP in 2009, Barrichello won the European and Italian Grands Prix and finished in third place in the World Championship.

Jock gives a unique insight into what makes a winning high performance team. He delivers a fascinating insight into the psychology of success and how to get the best out of top tier talent.

Jock Clear is a very strong speaker who's presentations are supported by fantastic visuals and anecdotes from the world of F1.

How to book Jock Clear?