Martina Navratilova, tennis player extraordinaire, took women's tennis to a new level with her speed, determination and agility. She won the Wimbledon women's singles title a record nine times and has been described by many as "the greatest singles, doubles, and mixed doubles player who's ever lived".

"One of the most successful tennis players ever and an equally successful leader." 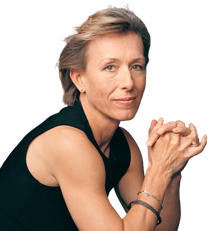 In all, Martina has won 18 Grand Slam singles titles, 31 Grand Slam women's doubles titles (an all-time record), and 10 Grand Slam mixed doubles titles; in total she has won 59 Grand Slam titles. She still plays at all the Grand Slams where she takes part in the legends doubles. Martina has been described as honest, feisty, self-deprecating, courageous, controversial and a Rennaisance woman. She's always told it from the heart, never flinching from an unpopular comment or cause if she believes it to be right. She is a global icon for lesbian and gay rights and is, as she describes it herself, a citizen of the world. Martina now spends her time between being at home and broadcasting as a presenter/commentator for the BBC, Tennis Channel and BT Sport.

A champion on and off the court, Martina is not only a tennis legend, but an inspirational leader who demonstrates tenacity, candor and motivation. Knowing first-hand what it takes to overcome adversity and find success, Martina is a compelling advocate for active living and goal-setting.

Highly inspiring and charismatic, Martina Navratilova is in great demand to speak at conferences throughout the globe.

How to book Martina Navratilova?