Martin Johnson is a modern rugby legend who went on to become the England team manager from 2008 - 2011. He has achieved all there is to achieve in rugby since making his England debut in 1992. He captained his club, Leicester, to all the major honours. 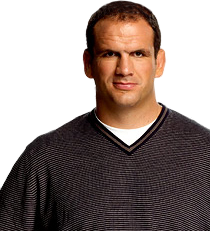 At Leicester he won four successive league titles and two European cups. Arguably the greatest lock forward of his generation, Martin Johnson captained his club and country to huge success. Most famously in 2003, he became the first player from the northern hemisphere to lift the World Cup. Martin held a unique position in world rugby being the only man ever to have captained the British and Irish Lions on two separate tours, to South Africa in 1997 and Australia 2001. To cap an outstanding career Martin was awarded a CBE in the 2004 New Year's Honours list.

An excellent leader and team player, Martin is a highly motivating speaker and offers audiences great insight into the game of professional rugby and the driving forces behind his success both on and off the pitch. He explains how leadership is not about making yourself look good, but about helping your people to look good.

6'7" tall Martin wittily describes the wide appeal of rugby while highlighting the heroes, the larger than life characters, the great performances and the memorable battles in both the Southern and Northern hemispheres.

How to book Martin Johnson CBE?