Former Chancellor of the Exchequer & Secretary of State for Justice

"He is the kind of politician who will cross a road in order to get into a fight". Douglas Hurd 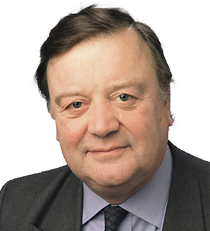 During his time as a backbencher and Shadow Minister, Kenneth broadened his business interests, taking on a number of non-executive directorships with companies including British American Tobacco, Alliance Unichem and Independent News and media (UK). Educated at Gonville and Caius College, Cambridge, Kenneth was called to the bar by Gray's Inn in 1963, and became a QC in 1980. He first became active in politics at Cambridge where he was President of the Union. Life in the House of Commons began on his election as MP for Rushcliffe in the 1970 general election.

Kenneth Clarke's vast experience on matters relating to British, European and global politics or the economy make him a popular choice as a keynote speaker at a variety of high level meetings or conferences.

With a perfect balance of humour and astute political insights Kenneth Clarke demonstrates to audiences the characteristics which made him such a strong and masterful political operator. All of his presentations are tailor-made for the particular audience addressed.

How to book The Rt Hon. Kenneth Clarke MP?