Joschka Fischer is a Senior Strategic Counsel at ASG, where he advises clients on issues relating to Germany and the European Union from his Berlin office. Mr. Fischer served as Minister and Vice Chancellor of the Federal Republic of Germany from 1998 to 2005.

"A leading political figure and expert in current affairs and crisis management." 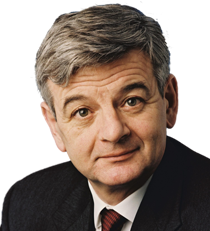 Upon his appointment as Minister of the Environment and Energy for Hesse in 1985, he was the first German Green to assume a government post. Joschka Fischer served in various capacities in the Hessian State Assembly; as Hessian Minister for the Environment, Energy, and Federal Affairs; and as Parliamentary Spokesman for the Green party in the German Bundestag, the Federal Parliament. He has held a professorship at the Woodrow Wilson School of Public and International Affairs at Princeton University. One of Germany's longest serving Foreign Ministers, Joschka Fischer looks at the challenges and opportunities facing Europe.

Joschka Fischer is greatly admired for his personal integrity, charisma and pivotal position in critical national dialog about his country's role in European integration. He offers audiences tremendous insights into international political developments and the socio and business scene. Fischer also demonstrates what it takes to successfully negotiate on the international platform. His political commentaries are syndicated internationally.

His leadership qualities and his outstanding rhetoric qualities have made Joschka Fischer one of the most requested political speakers across the globe.

How to book Joschka Fischer?