Gary Kirsten was an international cricketer best known by his peers as a man on whom the team could depend in times of crisis. As an opening batsman for South Africa his ability to withstand enormous pressure from the fastest bowlers in the world to the guile and cunning of the most crafted spinners was legendary. 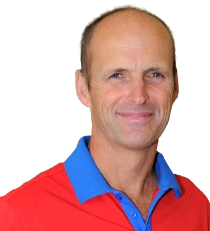 Gary's greatest achievement will always be the record-equalling score of 275 against England, which demonstrated his complete self-discipline. From 2011 to 2013 he was the head coach of the South African national cricket team. After his retirement Gary focussed on achieving his ambition of combining cricket specific coaching techniques with those applied in other sports and the business world. In playing 101 Tests and 185 ODI's Gary gained an insight to a world understood by very few. By his own admission his ability and technique needed to be complimented with a temperament that demanded absolute dedication to continual self-improvement and reflection. This period moulded his outlook on the game and began a process that will forever be known as his finest hour, that being the coach of Team India that won the 2011 World Cup.

Gary is able to connect to all levels of the business and sporting spectrum. He is driven by a desire to understand what creates sporting success and enjoys looking beyond the traditional environs of any sports. His own experience of executive coaching in the business world, combined with his experience on the field is the reason he was appointed as India's head coach.

His attention to detail and structured approach makes him an effective communicator. His articulate and eloquent manner combined with a presence endears him to all. Known for his straightforward approach, Gary has the knack of simplifying often complicated issues. His passion for excellence and accountability is infectious.

How to book Gary Kirsten?