Former Olympic Triple Jumper, Commonwealth, European and World Champion, he has held the world record in the event since 1995. Jonathan Edwards currently sits on the board of LOCOG as their athlete representative. He is Chair of the Sports Advisory Group, having played an important part in the success of the London 2012 bid as an Official Ambassador, and a member of the Athletes Advisory Group. He also is a Lloyds TSB London 2012 Ambassador working closely with the bank up to and beyond the London 2012 Olympic. 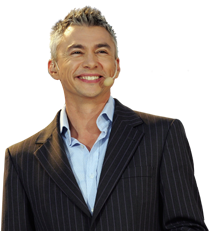 After a career of fifteen years, and accolades including the BBC Sports Personality of the Year, Jonathan retired from competitive athletics and turned his attention to broadcasting. After a stint presenting Songs of Praise, he joined the BBC commentary team. He was awarded the MBE in 1996 and the CBE in 2001 in recognition of his achievements.

Jonathan offers a specific presentation on the 'Business of the Bid'. As an integral member of the bid team, he offers behind the scenes, information on the construction and implementation of the bid effort. Jonathan is passionate about everything the 2012 Games will do for sport in this country and he translates this in a genuine and inspiring manner.

Jonathan is an accomplished, comfortable and highly experienced professional speaker. He has a relaxed and natural confidence when he presents and is well known for his eloquent, clear and intelligent style.

How to book Jonathan Edwards CBE?