Alan Hansen is one of Britain's most successful players and captains of all time, he won all honours available at club level. Because of his acute knowledge of the tactical side of the game he became one of the nation's favourite commentators for BBC TV's Match of the Day, Grandstand, Sportsnight and Sky Sports programmes.

"I don't think anyone enjoyed it. Apart from the people who watched it." Alan Hansen 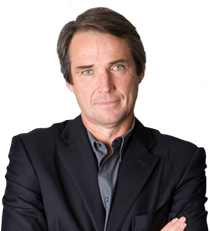 Within four years of starting his professional football career he was playing for Liverpool FC and went on to become captain of the team in 1985. He stayed with them until his retirement in 1991. Whilst Alan was at Liverpool FC the club won the following titles: League championship, eight times, FA cup, twice, European Cup, thrice and the League Cup, four times.

A confirmed achiever, he understands the many criteria at play in achieving your goals. As such he shows you what it takes not only to achieve but also to transfer your success to a new arena. A charismatic winner, he transmits the power of self belief.

With an easy style, this ultimate professional will charm and stir you.

How to book Alan Hansen?