Academy Award-winning Director of Avatar, Titanic, Terminator, The Abyss and many other Blockbusters

James Cameron is a Canadian film director, producer, screenwriter, editor, and inventor. His writing and directing work includes The Terminator, Aliens, The Abyss, Terminator 2: Judgment Day, True Lies, Titanic and Avatar. In total, Cameron's directorial efforts have grossed approximately US$1.75 billion in North America and US$4.91 billion worldwide, making him one of the highest-grossing directors of all time. Titanic and Avatar are currently the top two highest-grossing films of all time. 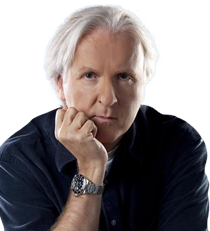 Described by a biographer as part-scientist and part-artist, James Cameron has also contributed to underwater filming and remote vehicle technologies. After seeing the original Star Wars film in 1977, he quit his job as a truck driver to enter the film industry. So important is technology in Cameron's films that he waited years for the technical tools of the craft to advance sufficiently to realize his vision for Avatar, for which he had special 3-D cameras developed. For a time he even sat on NASA's Advisory Council.

James Cameron has major clout in Hollywood. He has always cared about making sure the facts are right and in his fascinating presentations he shares this attention to detail, as well as other facets of his groundbreaking work. His reputation as a driven perfectionist has become part of Hollywood legend. With his experience, a James Cameron speaker appearance engages and touches on many topics.

Having blazed new trails in visual effects and set numerous performance records, James Cameron is truly unique. While his outsize films push the bounds of technology, they're always anchored in human stories with heart and soul and James easily conveys these feelings in his insightful talks.

How to book James Cameron?