Hazel Irvine is one of Britain's foremost and highly regarded TV presenters. An engaging and authoritative anchor with over 25 years of journalistic experience, Hazel is renowned for her professionalism and warmth. She is the "face" of BBC Sport's golf coverage including The Open and the US Masters, snooker and major events such as the Olympic Games and Commonwealth Games.

"One of the most prestigious journalists and sports presenters" 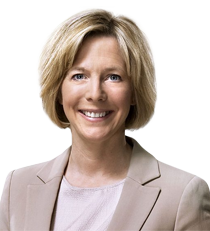 During her successful career, Hazel has presented, reported and commentated on a huge number of sporting events becoming the first woman on British TV to anchor football programmes in the late 1980's. She has commentated Opening and Closing ceremonies at the last 4 Olympic Games. The London 2012 Opening ceremony was watched by over 27 million people. The winner of the prestigious Royal Television Society's Sports Presenter of the Year award, Hazel also fronted the BBC's BAFTA award-winning coverage of the World Athletics Championships in 2009. Amongst her many projects for BBC News include the Six O'clock and Ten O'clock news, the Olympic Torch Relay, New Year LIVE and the 2012 Olympic bid announcement in Singapore.

In her presentations Hazel talks about her experiences in the sporting arena and the serious, but often hilarious, challenges it presents. She is also an experienced conference facilitator and awards host and her clients include major organisations around the globe.

Professional and truly powerful, the multi-award winning presenter has as many high profile credits in News, Entertainment and Events and is an ideal choice whether speaking, presenting awards or hosting events.

How to book Hazel Irvine?