Greg Searle MBE won a bronze medal in the men's eight at the 2012 Olympic Games in London. During the 2012 World Cup Series, he raced in the men's eight. Greg has worked as a management consultant at Lane 4 Management Group since 1997, working with senior executives as a personal coach or facilitating team meetings and running developmental workshops.

"Be the best you can be, whatever your age" 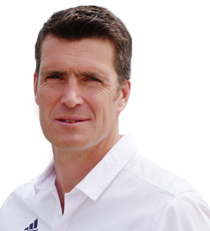 Greg won a dramatic Olympic gold medal, aged twenty, with his brother Jonny and their cox Garry Herbert in 1992. In recognition of this achievement Greg became one of the youngest ever recipients of an MBE. He and Jonny took the bronze at Atlanta in the coxless four (1996) and Greg retired from international rowing after the Sydney Olympics in 2000 with seven world championship titles also to his name. After his retirement as an international rower, Greg joined the British team in the America's Cup. He was a "grinder" in the 2002 Challenger Series. He returned in the men's eight for the London 2012 Olympics.

Greg excels when talking of teamwork, overcoming challenges, motivation and winning. His journey gets to the very heart of what it means to compete; teamwork and loyalty, the struggle to deal with disappointment and the will to win.

Greg's presentations are full of anecdotes and examples from his sports career as rower that have made him an immensely popular character throughout the world.

How to book Greg Searle MBE?