As Prime Minister, Fredrik Reinfeldt reformed the Swedish economy and labour market, making it one of the most competitive countries in Europe. The economy had higher growth rates and sounder public finances than other European countries and was the only country in the EU that lowered national debt during the financial crises. 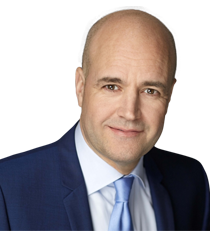 He has been active in international politics for over 25 years. Frederik Reinfeldt reinvented the Moderate Party and entered into an alliance with three other centre and centre-right parties. The four party alliance won two successive elections and Reinfeldt, as Prime Minister, presided over two coalition governments (2006 - 2014).

With an acute awareness of politics and economics, Fredrik Reinfeldt offers decision makers the tools to be able to decide what they must do to stay competitive in the global market. He explains and analyses the transformations in the social, political and economic environment worldwide and the implications for businesses.

Fredrik Reinfeldt is a stimulating and magnetic speaker whose qualities are best illustrated through examples of his speeches and presentations and the feedback from the numerous business executives who have heard him speak.

How to book Fredrik Reinfeldt?