Dewey Bozella is a former amateur boxer who is best known for being falsely imprisoned for a murder he did not commit. Convicted in 1983 for the murder of an elderly woman, he served 26 years in prison before having his conviction overturned in 2009. In 2011, Bozella's life was chronicled in ESPN's annual ESPY Award show in the Nokia Theatre at L.A. Live in Los Angeles, where he was honored as the recipient of the Arthur Ashe Courage Award. He has created his own foundation dedicated to fulfilling his lifelong dream - to work with kids at his own boxing gym. 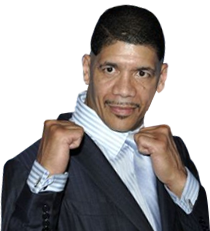 Dewey maintained his innocence and exhausted every appeal. He was offered more than four separate chances for an early release if he would only admit guilt and show remorse, but he consistently refused to accept freedom under such conditions. Anger at his imprisonment gave way to determination and instead of becoming embittered, he became a model prisoner: earning his GED, bachelors and masters degrees as well as working as a counselor for other prisoners. He found strength and purpose through boxing, becoming the light heavyweight champion of Sing Sing Prison.

Dewey's gut-wrenching story takes audiences on an emotional roller coaster as they struggle with the flawed US justice system that sent an innocent man to prison for most of his life, while warming their hearts with his unyielding determination and forgiveness.

Now a media personality, Dewey's presentations are filled with a mix of anecdotes and inspirational ideas.

How to book Dewey Bozella?