Dr. Eduardo Aninat is a recognised global finance expert who was the Deputy Managing Director of the International Monetary Fund (IMF) and previously Finance Minister of Chile. He has advised international firms, institutions such as the World Bank and the Inter-American Development Bank as well as governments on matters ranging from tax policy to debt restructuring.

"An expert on global economic trends" 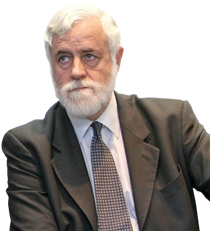 Eduardo Aninat taught Public Finance and Economic Development at the University in Chile and at Boston University. He held several economic positions in the Chilean Government including chief senior negotiator for the bilateral Canada-Chile trade agreement and chief debt negotiator and senior advisor of the Central Bank of Chile and the Ministry of Finance. From March 1994 to December 1999 Eduardo Aninat was the Finance Minister of Chile. He was the Chairman of the Board of Governors of the IMF and World Bank in 1995-96, and served three years as a member of the Development Committee of the World Bank and the IMF, representing Chile, Argentina, Bolivia, Peru, Uruguay and Paraguay. He was Deputy Managing Director of the IMF from December 1999 to June 2003.

Eduardo Aninat's experience in working with multilateral institutions and government, positions him uniquely to address the challenges of globalisation in the areas of trade and finance in the context of developing nations. He has been one of the most influential and important members of the executive board of the IMF. He is now in great demand as a speaker at major financial conferences around the globe.

Eduardo Aninat is a highly respected speaker who discusses critical issues, conveys practical survival tactics and shows audiences how to adapt to the ever-changing global economy in his informative presentations, refreshingly free of investment jargon.

He presents in English & Spanish.

How to book Dr. Eduardo Aninat?