Professor Dieter Kronzucker is a highly distinguished world-traveler in the field of journalism for German television. Currently he appears as a moderator for a series of programs on the German television network N24. Since 2001 he has also been a Professor of Television Journalism and Documentation at the prestigious Munich Academy for Television and Film. In 2008 he received the Blue Panther Award at the 20th Bavarian TV Awards Ceremony for his outstanding achievements as a journalist. 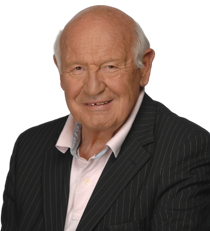 Prof Kronzucker was correspondent in South America for ARD/WDR (one of Germany's leading state-owned television channels) and in 1977 he became head of the newly created news flagship Heute Journal (ZDF). Subsequently he headed the ZDF Studios in Washington (1981-86) and for two further years headed and moderated Heute Journal back in Germany. In 1988/89 he wrote and presented the TV documentary Adventures and Legends, which took him to all parts of the world.

As one of Germany's most experienced and leading journalists Prof. Kronzucker offers audiences an unprecedented insider's view of current political and economical trends around the world and invaluable insights in to what the future holds for European businesses.

How to book Prof. Dieter Kronzucker?