Dr. Dennis Hong is an Associate Professor and the founder and Director of RoMeLa (Robotics & Mechanisms Laboratory) of the Mechanical Engineering Department at Virginia Tech, that has pioneered several breakthroughs in robot design and engineering. He has also pioneered various innovations in soft-body robots, using a "whole-skin locomotion" as inspired by amoebae. Marrying robotics with biochemistry, he has been able to generate new types of motion with these ingenious forms.

"An exceptional scientist and speaker" 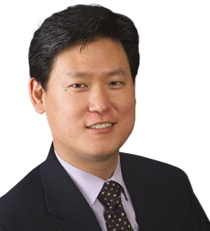 Dennis Hong received his B.S. degree in Mechanical Engineering from the University of Wisconsin-Madison (1994), his M.S. and Ph.D. degrees in Mechanical Engineering from Purdue University (1999, 2002). Dr. Hong also has a number of patents for novel robot locomotion mechanisms and devices for medical applications. TEAM DARwIn for RoboCup 2007 where he served as the advisor, was the first and only team from the US ever to qualify for the RoboCup humanoid division, and TEAM Victor Tango for the 2007 DARPA Urban Challenge (an autonomous vehicle race in the urban environment) where he served as the co-team leader, won third place with a cash award of $500,000. His senior design teams have been winning top prizes year after year at various design competitions. He is also a serious gourmet chef and a magician performing annual charity magic shows and lectures on the science of magic.

Named as one of Popular Science's Brilliant 10, Dr. Hong's research expertise lies in the area of novel robot locomotion mechanisms, design and analysis of mechanical systems, kinematics and robot mechanism design, humanoid robots, and autonomous systems. He expertly guides his audiences through his projects on robot locomotion and mechanism design at prestigious events worldwide including TEDxNASA in 2010.

Dennis Hong is a captivating, engaging and passionate speaker, who enthuses about his pioneering scientific breakthroughs.

He speaks English and Korean.