Denise Lewis OBE is an accomplished presenter, broadcaster, former athlete and President of the Commonwealth Games England. The former Gold Medal winning heptathlete, who holds the second highest number of points scored by a British heptathlete, has gone on to secure a successful broadcast career.

"One of the "golden girls" of British athletics" 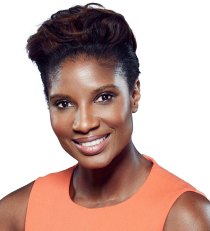 Since her retirement from Athletics, Denise has undertaken an array of television work including commentating on high profile athletics events and fronting shows such as BBC's Secret Britain and Right on the Money. In 2012, Denise covered the Commonwealth Games and the London Olympics, Denise has also covered the European Team Championships, the 2015 World Athletics Championships, the Rio Olympics in 2016 and the IAAF Championships in 2017. Charitable work is close to Denise's heart and she works closely with Breast Cancer Care and Sparks.

A charismatic personality, Denise uses the lessons she learned in the highly competitive world of top class female athletics to inspire and motivate audiences to achieve their goals. As a winning heptathlete she also understands the importance of diversity and how this leads to overall success.

Highly entertaining and inspirational, Denise's presentations are always well received making her highly sought-after at events across the country.

How to book Denise Lewis OBE?