Dee Snider is best known as the lead singer of glam metal band Twisted Sister and has been considered as one of the greatest front men of all time. Also a veteran talk radio host, Dee has hosted the internationally syndicated radio show House of Hair since 1997 which is heard in over 200 markets in the U.S., Canada and Mexico. 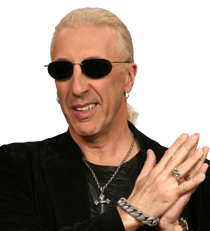 Dee Snider showed a talent for music early on, joining Twisted Sister in 1976. In addition to his extensive voiceover work and hosting duties, Dee wrote, produced and starred in Dee Snider's StrangeLand, a horror film credited with creating the torture film subgenre. With the success of his horror movie, he was tapped to host a weekly radio show, Fangoria Radio, spotlighting the horror genre on the Sirius network. Appearances on Celebrity Apprentice, Celebrity Wife Swap and Gone Country have further made him one of the most recognizable personalities in entertainment today.

In his presentations, Dee shares his compelling, funny, and at times touching stories and experiences. Believing that everybody is capable of becoming a "rock star" in their own life, Dee proves it by showing how his life lessons perfectly translate to help any career.

Through Dee's masterful storytelling and brutal, self-deprecating honesty, audiences will come away both entertained and inspired.

How to book Dee Snider?